For 18 months I sat in the sunny Gold Coast office of the surf magazine, watching the palm trees out the window and looking for a change in wind direction that signalled “down tools” across the office and a race to the Burleigh Point, or mid-Gold Coast beachies. But the whole time I was sitting in board shorts and thongs and  enjoying the security (and paycheque) of full-time employment, I was more often than not dreaming of sub-zero temperatures, icy faceshots and the quiet solitude of hiking through the backcountry with a camera in hand. If there was one major gripe I had with what many would consider a dream job, it was that as the Online Editor for a major surf magazine, I just didn’t get enough time to follow my true love: snowboarding.

So when I left the magazine, the first thing I did was book a trip to Japan. I wanted back in the game … and with four weeks in peak pow season, the game was sure to be on.

Dane Tiene had teamed up in Niseko with the kiwi boys, filming their webisode project across the island of Hokkaido, Japan Journals. And although I wasn’t able to meet up with ol’ mate Dane before he flew out, Nick Hyne and Nick Brown were more than happy to have me tag along and shoot some snaps with Connor Harding and filmer Heath Patterson.

It’s always a pleasure to work with the kiwis, as every one of them is just so chilled, friendly … and willing to throw down at every opportunity. And with Japan Journals, these boys are onto a good wicket, producing some great snow-travel-themed web edits full of banging tricks with some great backing from their sponsors.

Veteran shredder Nick Hyne has been to Japan more than a dozen times after first visiting on a high school exchange program, and so I had no doubt that he would have the locations dialled. And so for two days in late February the boys picked me up in Niseko in their Rhythm Snowsports-supplied van to shoot a backcountry jump hidden not far up a valley in the mountains halfway back to Sapporo, and a pillow-line cliff band outside Niseko.

Check out the jump we shot at 3:15 in this Japan Journals episode.

While it might have been just another couple of days in front of the camera for the boys, for me it was quite a successful two day return to the snowboard photography game. The great li’l shred magazine from the other side of the Tasman, NZ Snowboarder, was looking for some shots of Hyner, Browner and Connor and I managed to have a couple of shots published full-page, as well as a double-page spread with one of my Shibuya Crossing 35mm film panoramas, and a couple more shots throughout the magazine’s two issues of the 2013 winter. And through Nick Hyne I was able to tee up one of my shots being used as a full page ad in the skate and snow mag, Manual Magazine.

Not a bad outcome for two day’s shooting, if I do say so myself!

And with another snow trip booked (back to my second home, Lake Tahoe) for this February, I can say: it’s good to be back!

Click on the photos below to open them up in a full size gallery, and take a look at the finished results…

Yep … it was pow season in Niseko during February 2013! 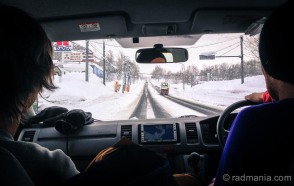 On the road with Japan Journals. Kutchan, just outside Niseko. 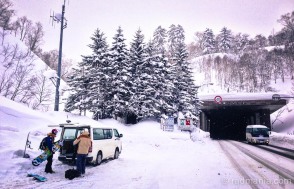 Pulled over somewhere on the highway.

Hiking to the goods…

Nick Brown warming up with a frontside 360.

Connor Harding dodging branches while he gets close to check out the Niseko tree-living wildlife (Heath Patterson).

Double-back flip from Nick Hyne. You can see the front-on angle in the video above at 3:24.

Nick Hyne styling a melon on this pillow drop.

Connor Harding dodging millions of fat Hokkaido flakes on this frontside 540. Check out the footage at 3:28 in the video above.

When it snows, it pukes. We waited for what seemed like ages (check the snow accumulation on my camera bag) for a window of semi-sunshine to shoot the pillow line Browner had in mind. It was worth the wait to see the shot in the magazine… 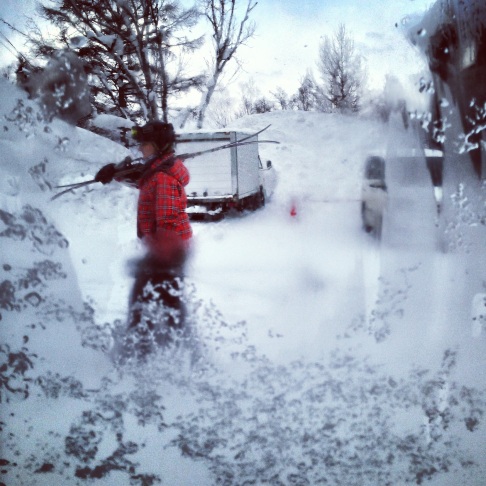 Looking out from the frozen Rhythm Snowsports van back in Niseko-Hirafu.

Wanna see more from Japan? Take a look at my landscape and lifestyle photos from Japan here, and my iPhoneography from Tokyo here and Kyoto here.

Europe has a fairly laissez faire attitude towards nudity and sexuality, but on our trip it seemed that any sort of premises, business or advertising campaign could be spiced up by adding a naked female…not that I’m complaining! 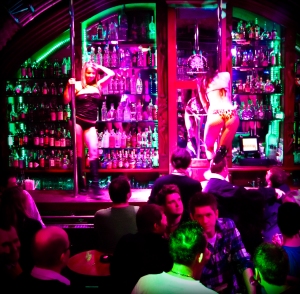 Our first taste of out-of-the-ordinary nudity was inside a pumping Czech nightclub in the old town of Prague, right near the famous Charles Bridge. Zlaty Strom is made up of a dozen or so underground rooms, some cavern-like and quiet, others decorated like an English pub or Saturday Night Fever dancefloor…except for the one side-room with vaulted ceilings, sky-high shelves of alcohol…and topless strippers dancong on poles in front of the barmaids! Suffice to say, it was a pretty popular room (with both guys and girls…but mosty with guys). Clearly impressed, Dane was keen to take some of the moves he saw up on the bar down to the Euro-disco dancefloor room – but I don’t think he was keen to emulate the nude sex toy show that apparently went on at the bar very early in the morning. This might sounds like we actually just went to the strippers, but no, Zlaty Strom is a legitimate, high-end club in Prague (but ok, we did get the tip-off to go there from a scantily clad Prague Hooters Girl who frequented the club often – but, like the slogan says, maybe she was just: “Delightfully tacky, yet unrefined”?).

A couple of days later In Spindleruv Mlyn we came across this trashy sign on the way into town that advertised a ski school and ski gear rental. What is with the chick? Going on the quality we saw on our trip, she must be the ugliest girl in Czech! Whose topless sister is she…and why did they decide to make a billboard from a photo that looks like it was taken with a 4-year-old point and shoot camera?

But while that advertisement and business was clearly low-rent, even the official ski school of Spindl had funny sex-themed billboards to get you to employ their services…and teach hot girls to keep their legs together, presumably?

But it wasn’t just the crazy Czech’s using booty to try and relieve you of your hard earned, ah, booty. After the Innsbruck Air and Style we maxed out the gutless little Renault Kangoo on the autobahn on our way to Munich for the ISPO tradeshow. This thing is huge, rivalling, and some say, out-doing the SIA trade show in Denver. There are three halls full of snowboard companies, at least four for ski companies, a couple for outdoor brands, then some halls for Asian manufacturers to show their wares. I only saw the three snowboard halls, complete with the Volcom skate halfpipe, and visited the aussie boys in at 3CS and Destyn Via.

It was good to these guys making inroads into the massive European market, but what impressed me most was the Ride Snowboards stand. It was the first thing you saw after entering the snowboard wing, tall and imposing and styled up like a New Orleans Bourbon Street strip club, complete with a huge black bouncer guarding the velvet rope and curtains of the entrance. Out the front among the thronging crowd promo-girl hotties handed out specially minted coins, which you could then go into the private booths and put in the peep-show slot. And behind the frosted screen was a 2011 board, boot and binding package, lovingly presented by a busty stripper under UV lights. Impressively creepy! But after hearing rumours of actual nudity, I was lucky enough to get myself inside the Ride booth just as Big Black closed the rope and shut the curtains…just in time for that same stripper to get on the podium and pole in the middle of the salesfloor and give a real performance! Does this sell more snowboards to the dealers and distributors? Who cares! I’ll take a freebie anytime.

And just to round out our european sex-sells adventures, while we were filling up the hire car’s tank before taking it back, I came across this great point-of-sale display for Jack Links beef jerky. Coz clearly smoke-dried dead-cow is a natural fit for naked babes!

However, that is one display that certainly makes me want to buy all the packets to see what’s underneath!

Did I forget to mention that I love Europe?

Keep an eye out for some more of my Euro adventures in the next few days.