The X Games is the self-described biggest and most important winter action sport competition … outside of the Olympics, of course. And after finally getting to experience my first X Games just a couple of weeks ago, and seeing the transformed Buttermilk mountain with it’s huge mounds of snow, lighting arrays and TV and spectator infrastructure, I’d tend to agree. The fact that so much is packed into such a small portion of the mountain is quite amazing. One chairlift accesses the SBX track up higher, the slopestyle course, superpipe and big air jump in front of the base lodge.

It was an awesome few days in Aspen, checking out the resorts by day, and the X Games craziness by night. The highlights were seeing Scotty James throw down and Torah Bright securing a bronze medal on the big stage. A shot or two from the trip should make it into Australian-NZ Snowboarding Magazine this season, so keep an eye out. If you ever get a chance to experience the X Games I couldn’t recommend it higher. Yeah, it’s very “Yee haw, ‘Merica rules!” with it’s Navy sponsorship, simplified narrative and questionable judging catering to ESPN audiences and the mainstream spectators (ie it certainly ain’t a core, cool event like the US Open or Stylewars in Oz), and it really does get frigidly cold outside at night. But the huge crowd, the TV razzle-dazzle, smooth running of a legitimately big event and the insane feats of snowboardery you get to witness more than make up for any negatives.

And in the meantime, enjoy these snaps.

Taylor Gold with a classic method.

This gives you an idea of how big the snowboarders go. The amplitude out of the pipe is just something that can’t be translated to TV. Massive.

Scotty James styling it out with a Fakie Air To Regular to kick start his run. 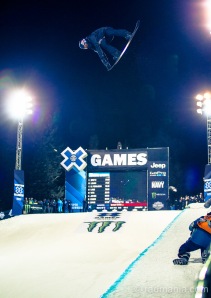 Shaun was a little off his game after a year away from competitive snowboarding. He still went huge, but interestingly 5 feet less on his first hit than last year. And here you can see him reach, but miss, the double tail grab.

Danny Davis’ run was impressive for its amplitude, style and inventiveness. A worthy Gold Medal winner.

The “made-for-TV” Big Air didn’t give a great vantage point for the hundreds (thousands?) of punters or the photographers, as the jump mound was so big you couldn’t get a good view of the kicker or landing, even along the monster pipe wall. But Yuki Kadono was impressive all night. 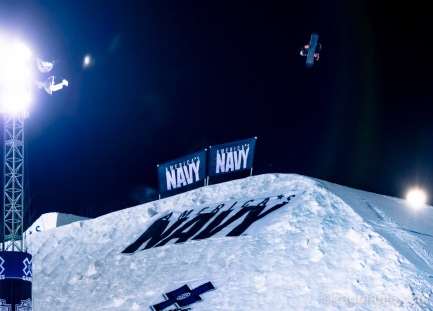 Torstein looking to launch into the sky like the private jets waiting on Aspen’s runway in the left of the photo.

Torah went so big on her second warm-up run that I cut off her tail. But it was too nice a shot to not post it.

Kelly Clark goes massive, but her style is doesn’t compare to Torah’s smooth, effortless riding. This boned frontside air was before she started the ballerina 1080’s on her first hit.

All eyes and lenses focussed on Torah’s money-maker … her famous McTwist, of course.

Chloe Kim was impressive – she went big, mixed up her run with much of it switch. At 14 she’s already an X Games gold medallist, and with some emphasis on style, she will be hard to beat.

And in case you missed it, take a look at Danny Davis’ gold-medal-winning run which he threw down on the last run of the night. Epic.

You know how I said Torstein Horgmo is the boss of all bosses? Well he proved it at X-Games over the weekend.

The Keystone vid was a precursor to Torstein’s tricks at the X-Games Big Air final – he locked away a backside triple cork, then stomped the first switch backside triple cork landed in competition, scoring a perfect 50 out of 50 score.  But with one rider still left to drop, when good mate Mark McMorris slightly skidded the landing of his Cab 1440 Triple Cork, both the young Canadian and Norwegian were tied on a best two-scores of 94. On countback, Torstein took the Gold Medal for his perfect scoring last jump.

Beyond epic, don’t you think? Watch the guys chat about it here:

But McMorris didn’t rest on his silver-medalled laurels long, landing the first triple cork ever seen in snowboarding slopestyle competition on his way to X-Games Slope Gold the next day. Well done, sir!