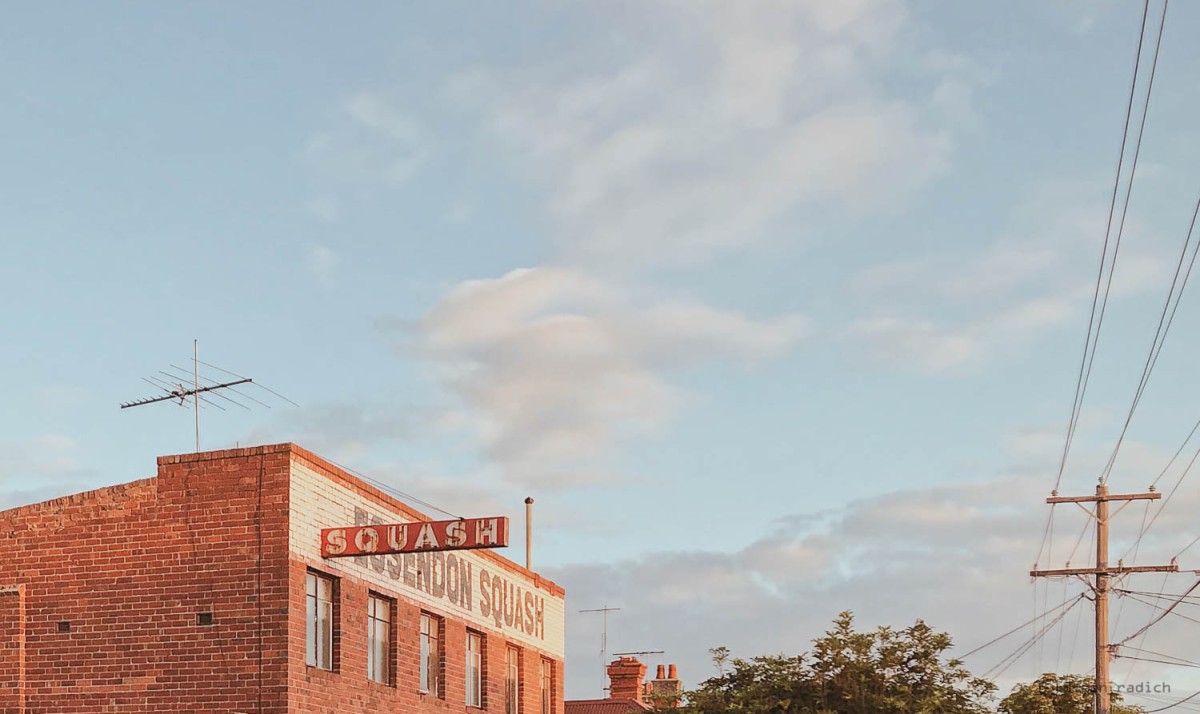 What a kick in the nuts COVID-19 has been! Looking on the bright side, Australia fared comparatively very well this year, but on the down side, Melbourne was forced to endure one of the harshest and strictest lockdowns on the planet. And I’m not gonna lie – it was tough. The mental stress of not knowing if things would improve, a police-enforced curfew from 8pm until 5am, being only allowed outside for 1 hour of exercise and being restricted to a 5km radius from home was extremely burdensome … and just draining overall.

But what it did give me was a greater appreciation for the everyday beauty in the ‘burbs less than 5km from my home. I’m fortunate that from Flemington there is a lot of great places nearby, and being restricted in my movements meant that I had to explore, by foot or by bike, a lot of places I would have normally bypassed. And of course I had my iPhone on me. Here is a selection of some of my favourite images from March until November (when we could finally start to get back to normal).

Some beauty in the ‘burbs … and a very empty CBD on the rare occasion I visited:

When we were permitted to travel further than 5km it was nice to by the water:

The Yarra River gets all the glory, but out west, the Maribyrnong has some real beauty:

And it’s funny, when you walk the streets, you notice so much more than when you zoom by in a car! 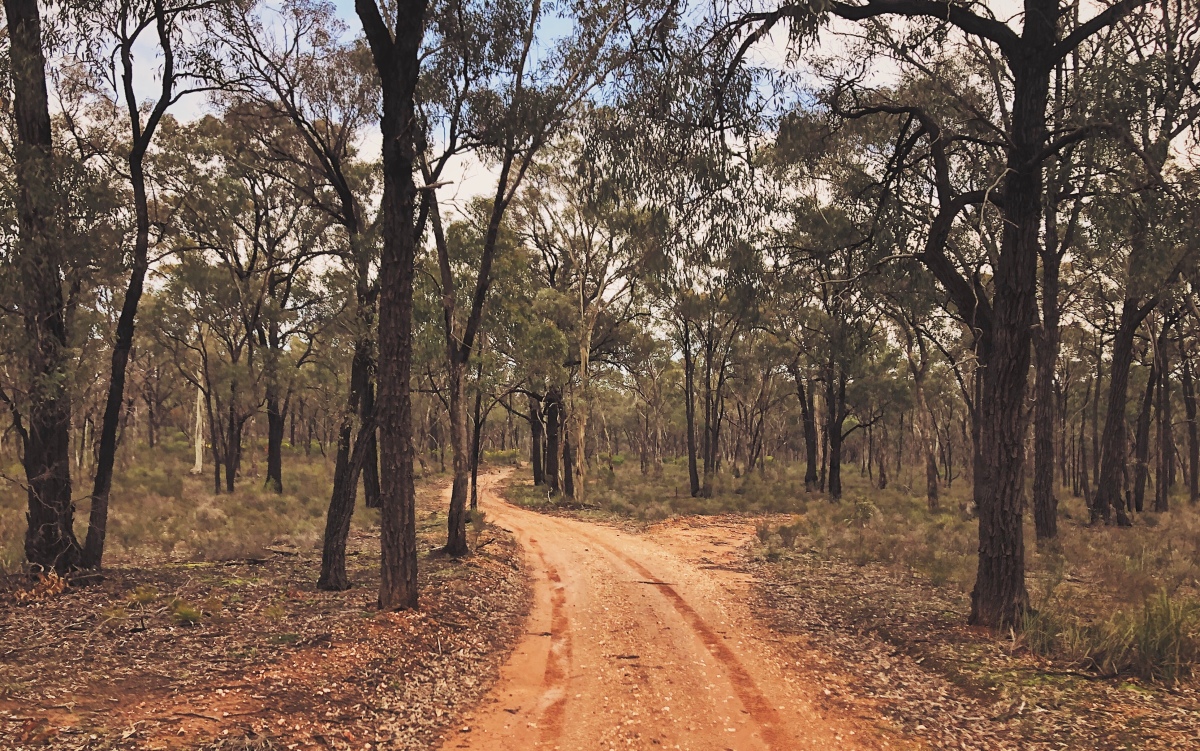 Well, it’s been a long time between blog posts … and the world has definitely changed! Melbourne began a COVID-19 lockdown in late March, before a gradual easing at the start of winter. And after a calamitous second wave of infections, right now we’re (hopefully) at the tail-end of a second, even stricter lockdown.

My wife and I were fortunate to be able to spend many weekends (when we could travel outside of Melbourne) at Tarnagulla in central Victoria. I spent some time exploring the bush fires trails on my mountain bike. Here’s a few iPhone images.

It’s a beautiful, peaceful part of the world … and we can’t wait to get back there.

With brilliant sunshine and warm mid-20 degree temperatures, Spring is definitely here, and so it made perfect conditions for a drive down the highway to catch the last few laps of the 2010 UCI World Championships Road Race in Geelong. Gary II may be gone, but its still a Cats town…and some parts of the race circuit hadn’t really moved with the times, but the oft-maligned city looked magnificent, with a great Corio Bay and You Yangs backdrop, and over 150,000 spectators provided a buzz of excitement. There were thousands of spectators on bikes…it was a shame for some that they didn’t have their own pursuit support cars.

I took the pro-camera and lenses down to have a bit of play. It was fun shooting something completely new, and I quickly realised that using a regular snowboard/ski shutter speed of 1/1000sec makes pretty static and boring shots. With the deep shadows, backlighting and harsh angled light, I just set the shutter speed in Shutter Priorty mode (“Tv” for “Time” on a Canon) and let the computer choose the correct exposure – unlike in snow photography where I shoot fully manual (partly so that any sequences have the same exposure across the spread). Then all I had to do to experiment with some motion blur was to spin the trigger finger dial and get down to even as low as 1/40sec and pan the camera. And whereas I often also like to manually focus, here I had to just trust the auto-focus servo tracking of the fast moving riders.

The cyclists move bloody quick when they go straight past you, and I had to be careful not to bang someone in the head next to me as I panned quickly. Another hazard to avoid is getting hit by the peloton as they zoom past close to the barriers down the straights – they certainly don’t leave much room for error. The crowds were huge, and I can see that it’s pretty hard to get a money shot unless you are a fluoro-vest-wearing accredited photog with access to the photo pits…or come prepared, like this guy. I know why you always see the shot of the cyclist crossing the line – it’s a great shot that shows the emotion of either the lunging competitors, or the celebrating and smiling champion – and it can be shot sharp with a fast shutter speed to look good in newsprint. 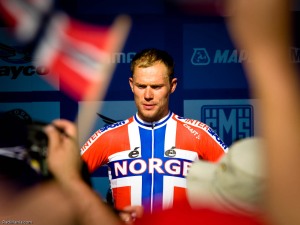 I was stuck on the wrong side for the final lap, but still managed to catch a shot of Tour de France legend Thor Hushovd lunging across the finish line to win Gold. Unable to see a screen, it was thrilling to hear over the PA that Cadel Evans made many valiant attempts to get another win this year, but it was too tough for him when the peloton caught up and a bunch sprint ensued. Great result for Team Oz’s Allan Davis to get third, and for Australia to lead to the overall World Champs Medal Tally with one Gold, Silver and Bronze over the few days of racing.

I managed to get as close as I could in the thronging crowd to the medal ceremony, but was blocked by lots of tall, cheering Europeans. Looking back at the photos, it’s interesting to see the look of relief on Thor’s face when the magnitude of what he has just done dawns on him, then moments later that relief turns to pure joy and celebration. That’s what sport is all about.