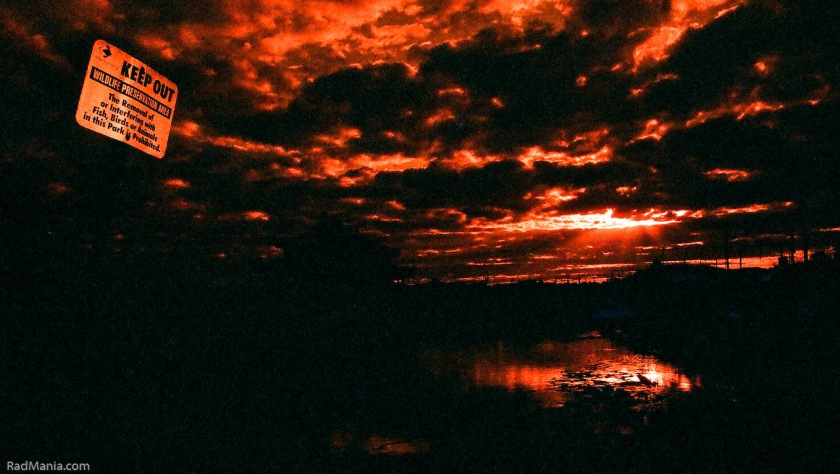 A little while ago when I was checking out some camera gear at Vanbar Imaging I came across this Rollei Red Bird film. It’s regular colour film, that produces negatives like your normal film-of-old would, however the colour emulsion layers are reversed with the red colour on top (instead of at the bottom). This gives a weird red colour to the finished prints (or scans, in my case).

So I put a roll in my old Canon EOS 5 film body and took some test shots a a few weeks ago. Unfortunately the film roll doesn’t have the normal auto-ISO barcode for your camera, so I had to set the camera at the film’s 400 ISO rating. However, my photos came out very underexposed using the EOS’s auto-metering mode and needed a lot of Adobe Lightroom manipulation to get them to a reasonable state. So I’m not sure if I should have maybe set my camera at 100 ISO, or maybe I will go and try the film out on a full manual old Minolta rangefinder I picked up at a cash Converters for 20 buck a few years ago? I thought there might be more variation in colour, but my photos came out very, very red. So I think I’ll stick to playing around with cross-processing various cheap and pro-quality slide film to get some experimental film effects. You can also buy disposable cameras pre-loaded with Red Bird film (and others, like Cross Bird) at Van Bar Imaging.

Another little photo experiment I finished a week ago was with a Konica super wide-angle disposable camera I had bought on special at Vanbar a couple of years ago. I had forgotten about this little piece of photographic plastic, and found it again in a box in my room earlier in the season, and I thought that with POV (point of view) snowboard photos being all the rage (see right), this cheap little thing might provide some interesting shots. Well, it wasn’t going to be a huge loss if I dropped it and it broke, unlike with a super-expensive DSLR and $900 15mm fisheye lens attached. Again, the film in this wide-angle disposable was rated at 400 ISO, so I thought it might have a reasonably short enough shutter speed for full daylight action.

When I could hold the camera still compared to the movement of my body the shots came out sharp, but really, the results are a little disappointing, and I discovered it is actully pretty hard to think about getting the perfect right moment with a single shot when you are mid trick – much easier to initiate a turn or trick and hold the motor-drive down to snap a bunch of shots and then pick out the best one later. I was also hoping that the camera would be more fisheye than it is, but it’s more like a wide angle 17- 18mm.

Anyway, take a look at the shots and enjoy…

One thought on “Film fun…”