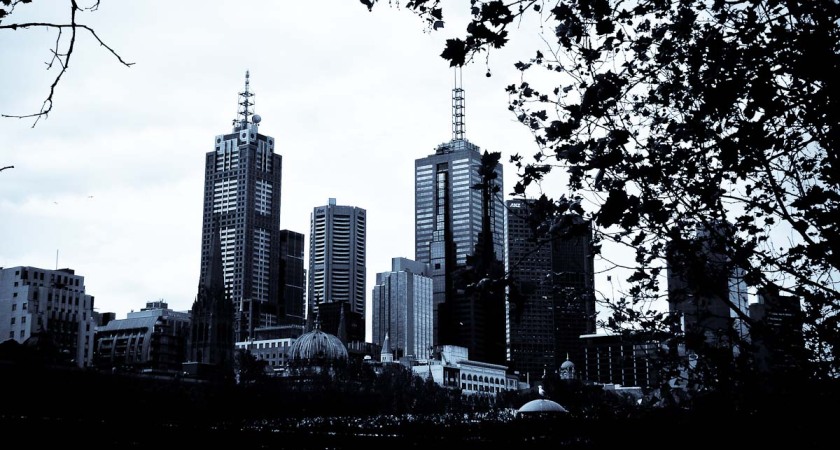 It’s been a change for me being back in Melbourne for Easter, catching the last heat of summer and seeing the pre-autumn city the way I haven’t seen it for more than 5 years. With the first tinges of brown on the leaves and the water still warm down on the Surf Coast, I’m starting to again see some of the attractions of this city.  And with a couple of interesting exhibits on, I thought it was time I headed into town and took a look at my city through the eyes, and lens of a tourist…

First up was a trip to the NGV International to see the inspirational work by Ron Mueck, with a handy free-entry pass from a school friend Caterina, who now works at NGV. Mueck is an amazing artist, with an ability to capture “life” of a figure in his sculptures not seen since Michaelangelo. It is absolutely mind blowing what he is able to do with some resin, fiberglass, paint and synthetic hair. If it wasn’t for the hyper- and micro- scale of his sculpures you could think that real humans are right in front of you, and their nudity is so life-like and confronting, sometimes you don’t know where to look. His ability to capture the sponginess and detail of skin, complete with moles, wrinkles, goosebumps and hair is a true wonder. It reminded me of the ‘lightness” and deftness of touch Michaelangelo achieved with his Pieta. Yes, the old master was carving out of marble 500 years ago, but I reckon if he was around today he might take inspiration from Mueck and try the equally as solid fiberglass as a medium for his statue to celebrate the city of Florence. Don’t you think that in black and white, and if you added some horns, this face could almost be Moses?

And the great thing about the exhibit is that Mueck wants viewers to be able to take photos of the work. It was great seeing so many people enjoying the sculptures and so amazed by them that they just had to capture a likeness on their iPhone. But from this article in The Age, I guess Myf Warhurst doesn’t share my enthusiasm. Take a look at the detail of these feet – this photo could be of a real person, as you can’t tell they are at least two-times scale.

Unfortunately the NGV Ron Mueck exhibition just ended, but for more information about him click here and here. And here’s an article which goes into Mueck’s actual production of his artworks, showing some photos from start to finish.

Next on the culture hit was my first visit to ACMI, the Australian Centre for the Moving Image, for Dennis Hopper and the New Hollywood. ACMI is hidden amongst Federation Square and overshadowed by the amazing NGV Australia. ACMI is all about film and TV, and so I wasn’t all that interested in the permanent display, although there are a few cool interactive exhibits, and it might be just about the only place in the world where video games (which you can play on big screens) are heralded as a true artform. Dennis Hopper, as I found out, was much more than the pretentious Hollywood actor who is now warding off life-ending cancer whilst embroiled in a bitter divorce and child custody battle (check out this creepy photo of him and his daughter – Yes! Daughter!) Hopper was part of the LA art scene in the 60’s and onwards, producing some notable photos, assemblages and paintings, as well as writing, directing and starring in Easy Rider, and being a west coast champion for the artworks of Roy Lichtenstein and Andy Warhol.

Unfortunately this exhibition didn’t allow cameras, but I did like Hopper’s super-sized painting reproductions of his photos, as well as his 60’s and 70’s Hollywood photos and large photos of grafitti detail. ACMI is a strangely laid out exhibition space, and with the emphasis on “moving image” the static artworks by Hopper and others was interrupted by video walls playing snippets from Hopper’s movies. So it wasn’t as impressive an exhibition as Ron Mueck, but I certainly learned more about a very interesting Hollywood character and may have even picked up some more inspiration of my own. While I wasn’t fully impressed with Hopper’s work and the collection in general, I don’t think I fully agree with this other article from The Age: I’m glad that Hopper didn’t just stick to his day job and managed to record Hollywood through a lens, and expressed himselves in other way than film. But perhaps the notoriety of his art has had more to do with the clique of famous artists he hung out with, and then with his Hollywood cache, rather than the actual finished works?

Here’s some info on Dennis Hopper’s various artworks and photography, if you are interested. Otherwise, enjoy my photos from in and around the city and from inside the NGV.